Posted by jeremysutton on Mar 28, 2015 in Uncategorized | One Comment 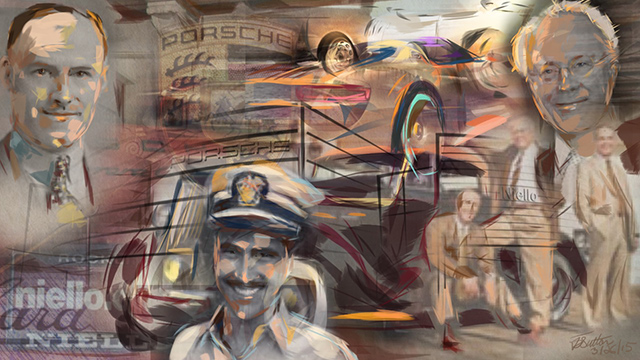 I created this historical collage as a live painting performance at the Niello Porsche dealership in Rocklin, California, as part of their Grand Reopening Celebration. I started the painting with the grandfather Louis who first sold Packards and Pierce Arrows, showing the Packard he handed down to his family and the historical showroom in San Francisco where he started off. I then painted in the second generation, his son Richard Sr., with the early Porsches, and finally the current owner, Rick, Richard Sr.’s son, and included the latest Porsche 918.

Thank you to Rick Niello and his fabulous team at Niello Porsche. Congratulations on your magnificent Grand Reopening! Thank you to Steve Bloom and Hip Entertainment.