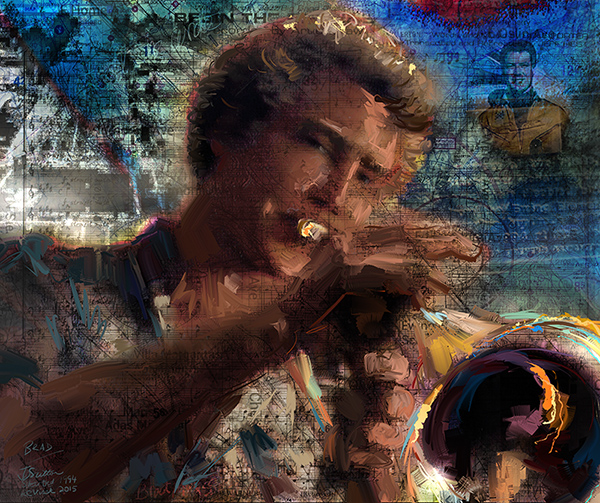 I first met Brad when I was working in the San Francisco Bay Area (at Varian in Palo Alto) for the summer of 1982 while studying Physics at Oxford. Brad kindly put me up in his basement in Menlo Park and the main image of him playing the trumpet is based on a photo I took that summer. Brad loved playing the trumpet and loved jazz. Amongst his favorite jazz musicians was Artie Shaw. That’s why you see in the background the sheet music of Begin the Beguine, a 1934 popular song written by Cole Porter and made famous when performed by Artie Shaw and his band. When I returned to live in California in 1988 I rekindled my friendship with Brad, by then a professional pilot. Tragically he died on December 14th, 1994, when the Learjet he and fellow pilot Richard Anderson were flying for a National Air Guard training mission crashed on E. Olive Avenue, Fresno, after narrowly missing the Ewing Elementary School. Within this painting is a map of the Fresno area airspace and the plaque in his and his colleague’s honor that was installed in the Ewing Elementary School. This painting was included in an art show in Fresno and while installing the show, which was my first visit to Fresno, I visited the crash site and the Ewing Elementary School. I was surprised to meet two teachers at the school, Dawn and Kim, who had been at the school the day of the crash. Both are still grateful of the efforts Brad and Richard made that day to avoid hitting the school. It was very moving to meet them and for them to see this portrait.

Meeting with Dawn and Kim outside the Anderson-Sexton Library, named after pilots Brad and Richard, where the memorial plaque is located.