Posted by jeremysutton on Dec 5, 1996 in Uncategorized | No Comments 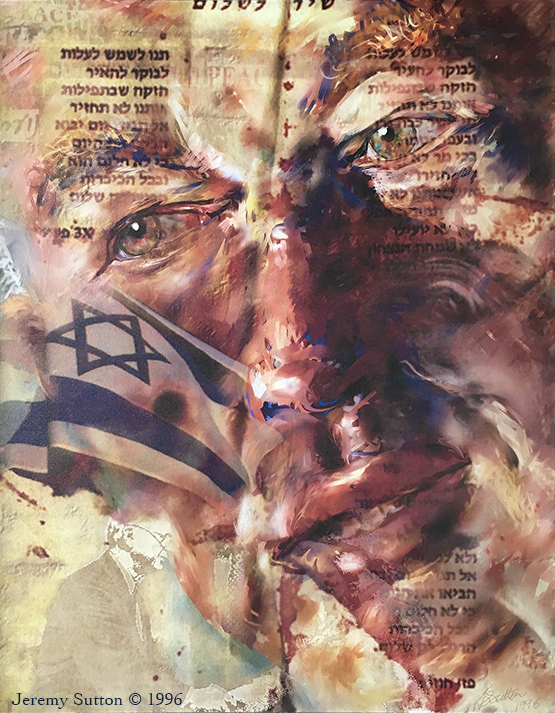 Yitzhak Rabin was an Israeli politician, statesman and general. He was the fifth Prime Minister of Israel, serving two terms in office, 1974–77 and 1992 until his assassination on November 4th, 1995.

The morning after Rabin was assassinated, I saw the stark image of a bloodied song sheet with a bullet hole through it on the front page of the newspaper, the European (I was in Brighton, England, for my sister’s wedding). The song was Shir Hashalom, Song for Peace, a peace song from the 60’s that Rabin had just joined in singing with the crowd at the peace rally in Tel Aviv immediately before he was killed. The song is a beautiful poem about peace.

The Song for Peace (sometimes referred to as the Song of Peace) was written by Jacob Rotblit, and is sung to a melody by Yair Rosenbloom. Here’s an English translation (thanks to Miri Skoriak, who also provided me with some background to the song’s history and significance):

It really is a song for peace, as if sung by the deceased (i.e. a plea from the grave) to the next generation to pursue peace. The dead are asking the living to concentrate on the future (rather than on the past and the victims) and not be afraid to express their wishes for peace strongly. Aloud. Just like Rabin did! Rabin had placed the song sheet in his breast pocket just a few moments before the assassin’s bullet passed right through it. When I saw the song sheet (which had been reproduced in the newspaper upside down) I said to myself “That is my canvas.” I kept the cutting and from that moment on started working on the portrait in my mind, collecting material along the way.

As an aside, in 2014 I was teaching at the Palm Beach Photographic Centre in West Palm Beach, Florida, at the same time that eminent Israeli photographer, David Rubinger, was exhibiting there and I saw the same photograph of the bloodied song sheet that had inspired this portrait so many years before. It turned out that Rubinger had been called in the morning after the assassination to photograph the song sheet taken from Rabin’s pocket.

If you look carefully at the photograph below you’ll see not only his photograph of the song sheet but, on the left in the background, a portion of his photograph showing paratroopers looking at the Western Wall after reaching it in the 1967 Six Day War, a war in which Rabin played a crucial role as Chief of the General Staff of the Israeli Defence Forces.

I drew a portrait of Rubinger which you can see here.

A few months after the assassination I was asked to submit an image for an exhibition at the headquarters of Scitex in Herzlia, Israel. I knew this was the image and started work on completing the portrait. Scitex made the Iris inkjet printer (originally designed as a proofing printer for the commercial print industry) used in the 1990s by myself and other artists exploring the then-new medium of digital paint.

The symbols and elements in the collage include the crowds who were at the rally where Rabin was killed, the hand-shake with Yasir Arafat that broke the years of enmity and hate, the Western Wall pockmarked with bullet holes just after the Six Day War in 1967, and a photo of Rabin age 18 taken in 1940 when he was involved with the underground fight against the British mandate in Palestine. The Israeli flag flying at half mast, with the fatal bullet hole passing through it, is a metaphor for the way the bullet that killed Rabin also ripped a hole through the fabric of Israeli society.

I presented a Scitex Iris print of this portrait (printed courtesy of the Image House, Santa Fe) to Rabin’s widow, Leah Rabin, in January, 1998, just before she gave a speech in Cupertino, CA. She looked at it in silence and then said:”Those eyes..” 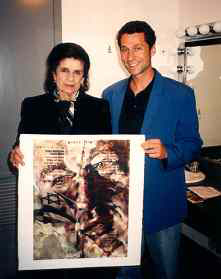 This web page is dedicated to the memory of Yitzhak Rabin and to the hope that peace will prevail. I also dedicate this page to the memory of Leah Rabin who shared her husbands ideals and who sadly passed away a couple of years after I presented her with the print.