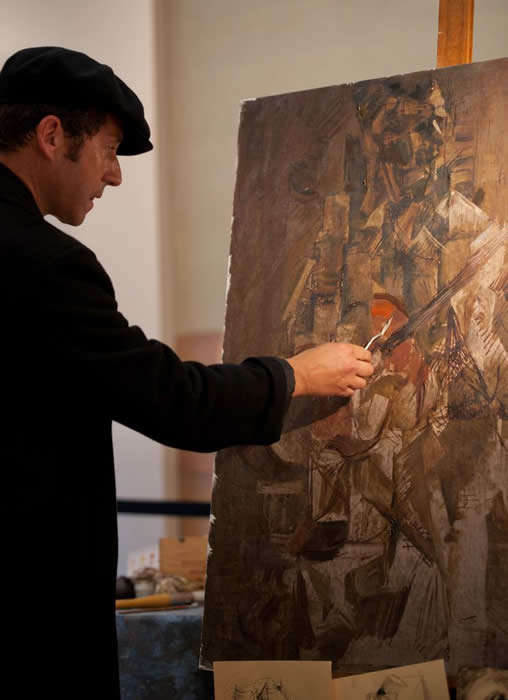 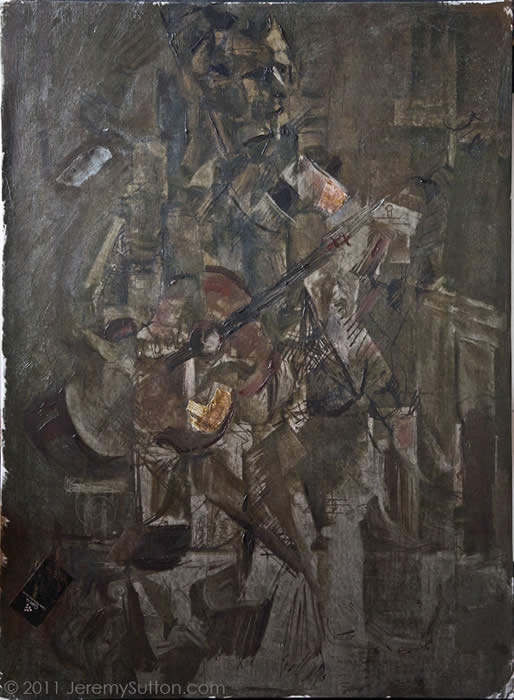 Man with a Guitar (after Picasso)

Created during tableau vivant portrayal of

This portrait of Flamenco guitarist Ryan Kelly Garcia was created as part of my tableau vivant portrayal of Pablo Picasso at the de Young Museum, San Francisco, September, 2011. My performance was part of the de Young’s Friday Night Cultural Encounter, a free public event, themed to celebrate the excellent special exhibition, Picasso: Masterpieces from the Musée National Picasso, Paris. My painting is inspired by, and named after, one of the paintings in the show—Homme a la guitare (Man with a Guitar), a painting Picasso completed in the Fall of 1911 in Paris as he was in the midst of his cubist experiments with his friend and fellow artist Georges Braque.

Here are photos from the performance at the de Young: 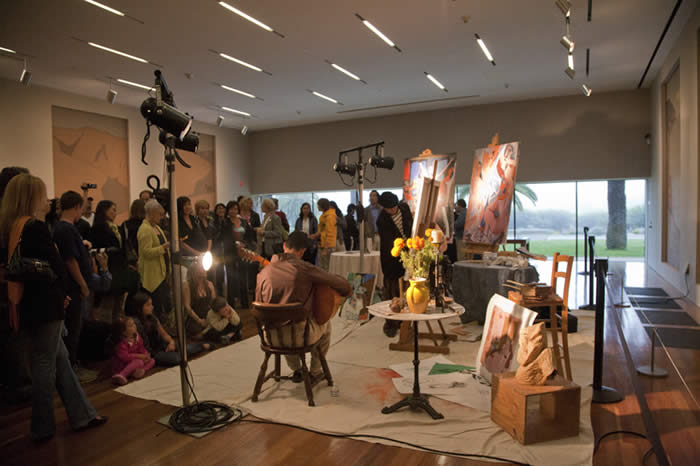 I am fascinated and inspired by the passionate and fearless intensity of Picasso’s art making—always experimenting, pushing, prodding, borrowing, branching and growing. He was ever ready to destroy and transform, never attached to or precious about his marks and his media.

This summer in London I painted a portrait of a friend, Robert, who, as a child in the south of France, spent a whole summer watching Picasso paint directly onto glass panels for the window of a church. He literally looked up at Picasso’s intense gaze as he worked. He said Picasso’s incredible intensity and concentration was undiminished over many hours, each day throughout the summer. At the end of the summer Robert was in the shop in the church and wanted to get a Picasso print for his parents but couldn’t afford anything. Then a voice said “Let him have it!” It was Picasso, who then signed the print for him.

In 1993 I created a portrait of Picasso, which was published in the National Association for Desktop Publishing Journal and subsequently, in 2010, was displayed in the San Jose Repertory Theater when they performed “A Picasso”. At Oxford University, while studying Physics (and art), I performed at the Oxford Playhouse in “Desire Caught by the Tail”, one of the only two full-length plays that Picasso wrote.

Here are Man with a Guitar preparative studies, each 9 x 12 inches, made with various dry media such as charcoal, pencil, ink and collage on paper: 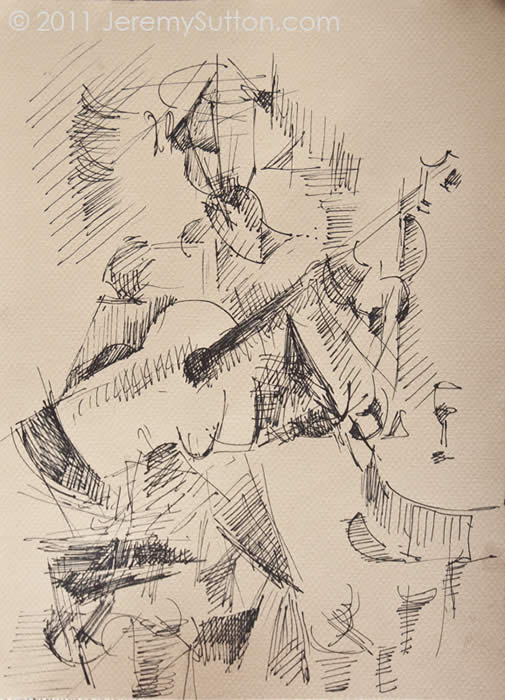 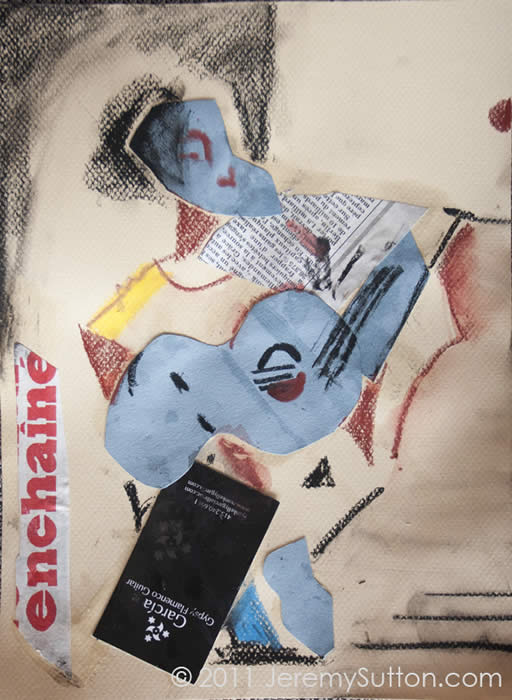 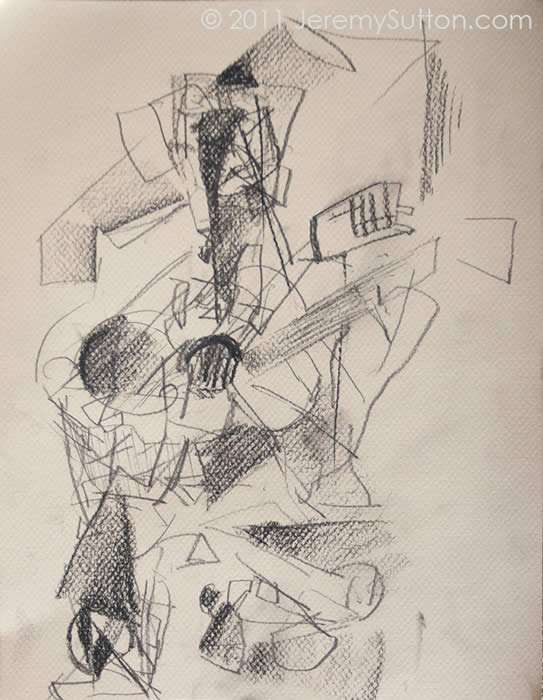 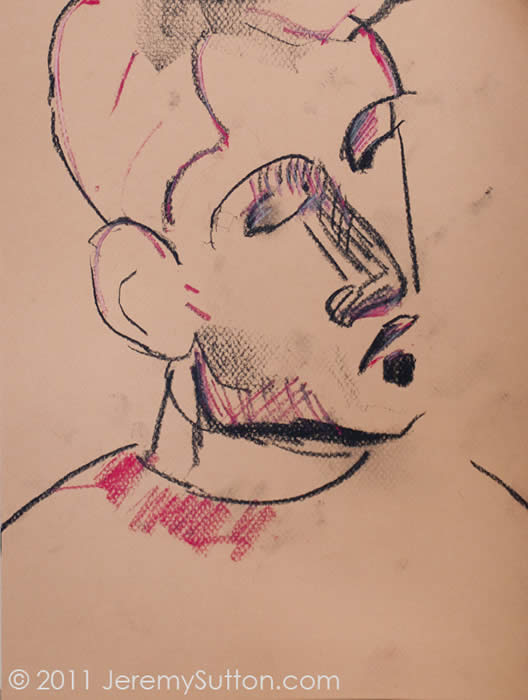 Here are some more photos from the tableau vivant performance showing the creation of a portrait titled “Le Canard”. This portrait was inspired by Picasso’s paintings of his mistress Marie-Thérèse Walter (portrayed at the museum by Peggy Gyulai). The title of the portrait is based on the newspaper cutting pasted in the upper left corner of the painting. The cutting is from the masthead of the historic French satirical newspaper “LeCanard-Enchaine” (“The Chained Duck”)which was founded in 1915 and which Picasso was sure to have read. 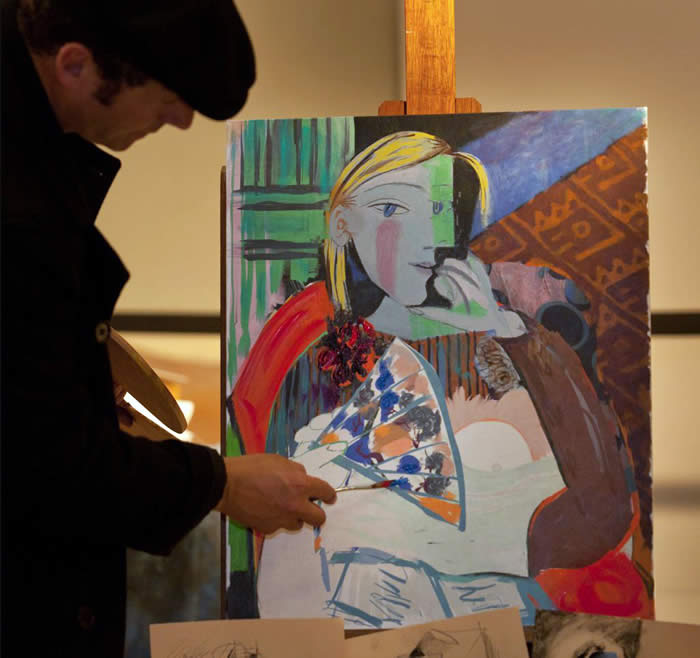 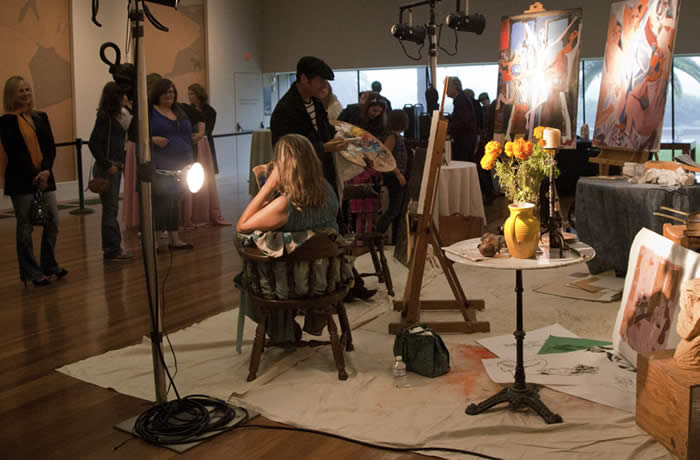 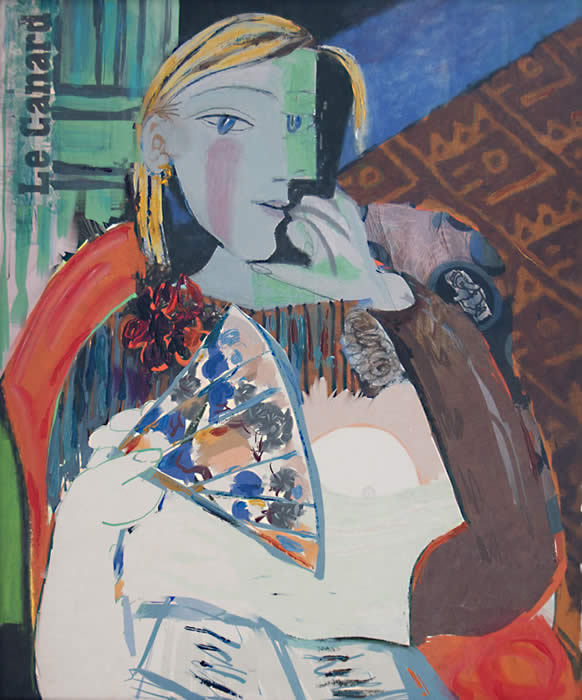 A third artwork I worked on at the museum was a mixed media collage titled “Still Life with Flowers, Guitar and Jug.” This was inspired by Picasso’s collage “Bottle, Glass and Violin” (1913). The guitar I chose for this still life was a gourd African guitar, a nod to the strong influence of Africa artefacts in Picasso’s early works and in the development of cubism. 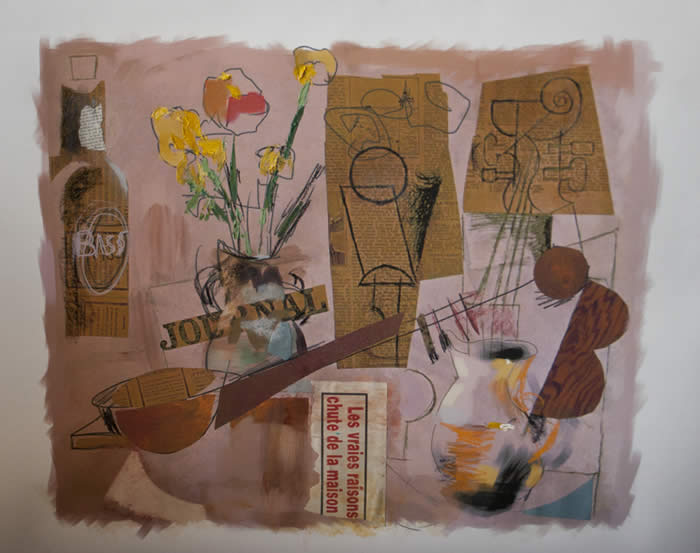 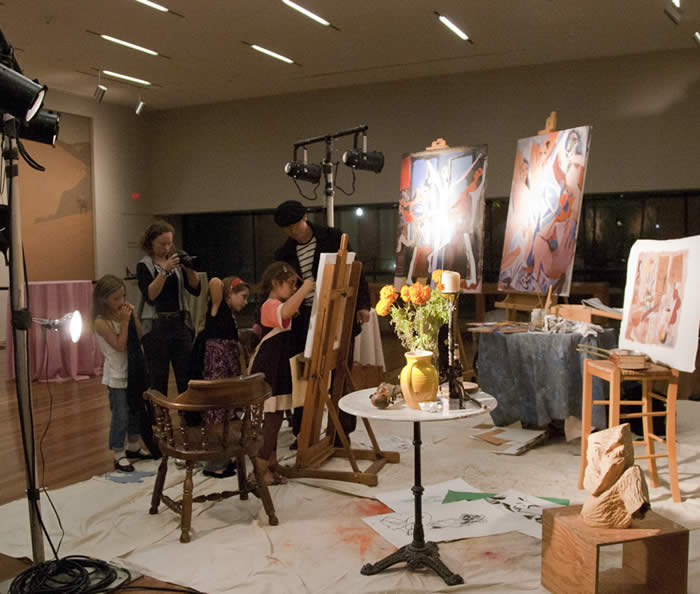 Here you see children who were watching me paint, sticking on a piece of newspaper at the end of the evening. They were fascinated by the performance and didn’t want it to end!