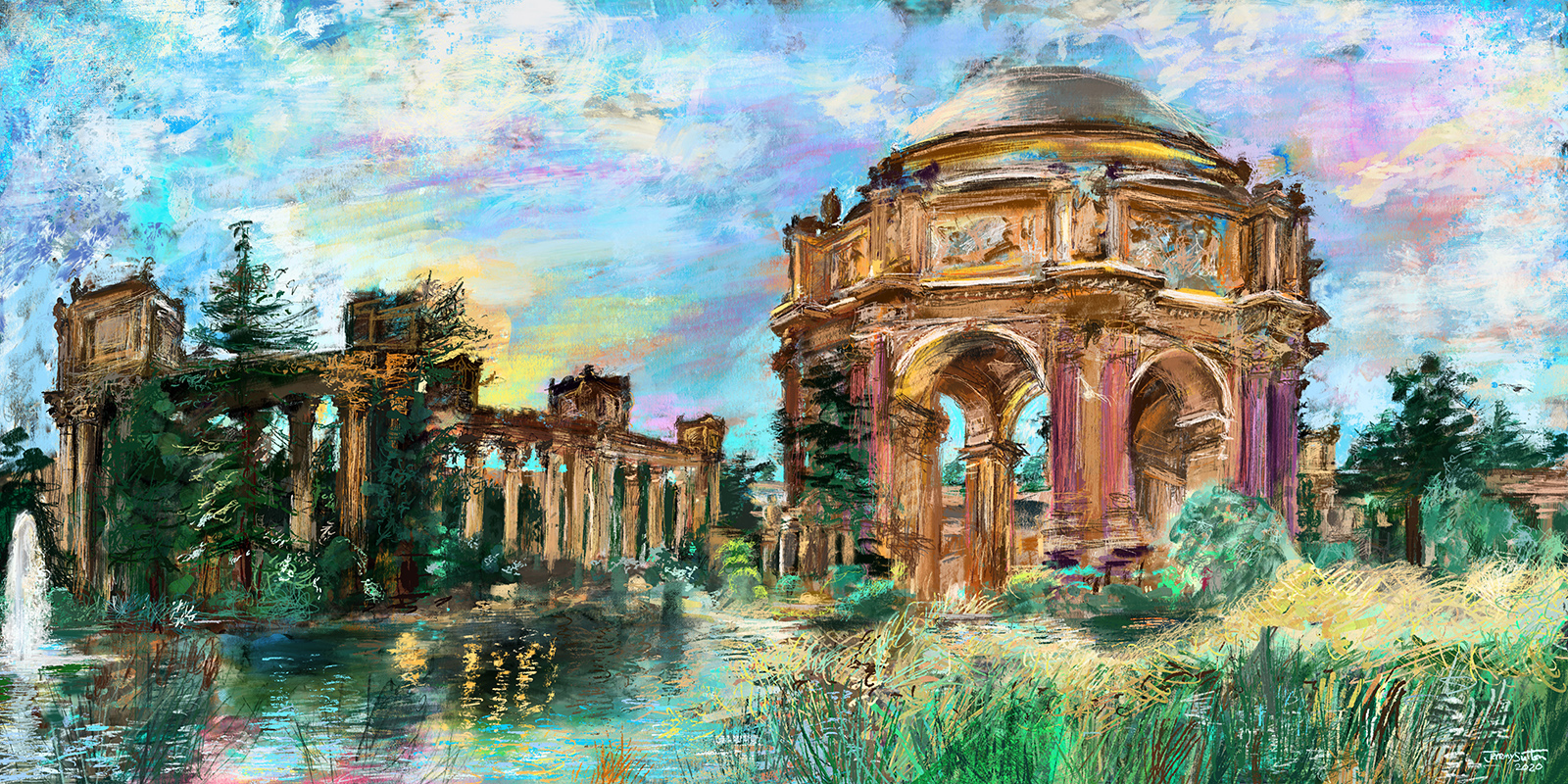 This painting was created outdoors (en plein air) over a period of weeks in numerous sessions overlapping with the early part of the City and State “stay-in-place” COVID-19 orders, using an iPad Pro, Apple Pencil and the Procreate app. Every brush stroke was made without photographic reference, from direct observation, as I sat at the Palace of Fine Arts, a magnificent creation designed by Bernard Maybeck for the 1915 Panama-Pacific International Exposition in San Francisco. Maybeck was inspired by the ruins of ancient Greek and Roman civilizations. A beautiful set of “ruins” that represent vanquished and mortal grandeur, this magnificent setting and architectural masterpiece was only intended as a temporary structure that would last 6 months. Instead, though, through popular demand it has endured. Now renovated and seismically retrofitted, it is one of the iconic “must sees” of any visit to San Francisco!

This video, which I use for the augmented reality (AR) video overlay, shows the time-lapse replay of the painting process plus some shots of the scene as I painted. You can experience the AR overlay yourself on your mobile phone by installing the free app Artivive and then looking at the final artwork through that app. 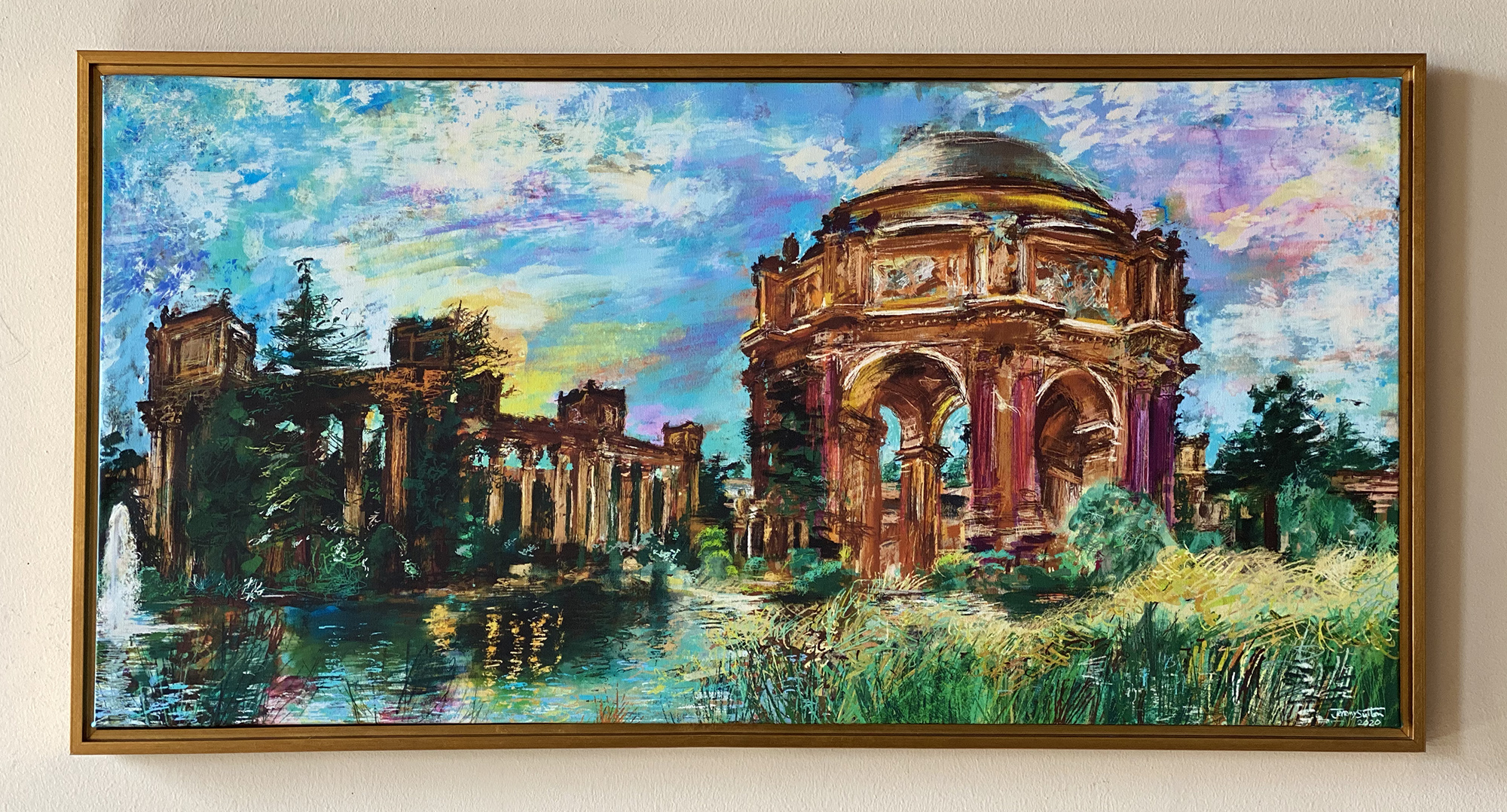 20″ x 40″, framed artwork, extended through use of the augmented reality free app Artivive.

“The Palace of Fine Arts was seen as the embodiment of Maybeck’s elaboration of how Roman architecture could fit within a California context. Maybeck said that the popular success of the Palace was due to the absence of a roof connecting the rotunda to the art gallery building, along with the absence of windows in the gallery walls and the presence near the rotunda of trees, flowers and a water feature.” And on the sign at the edge of the lagoon it further adds: “Maybeck also believed that architectural elements should come together like notes in a musical score, eliciting emotional responses from the viewer. He designed the Palace of Fine Arts to evoke the sadness and beauty of looking at a Roman ruin. If you visit the Palace repeatedly, you will notice that the mood is rarely the same; weather and time of day conspire to change the play of light and shadow over it’s surface.” explains Maybeck.

Further context is found in a wonderful article titled Joy in the Act of Drawing: Maybeck’s Palace of Fine Arts: “The Palace of Fine Arts was one of the principal buildings of the Panama-Pacific International Exposition, which took place in San Francisco in 1915. The exposition celebrated the completion of the Panama Canal, and its main theme was the bond forged between the East and the West. Among the reasons that San Francisco was chosen over other West Coast cities was its swift recovery from the 1906 earthquake.12 The city’s resuscitation demonstrated its physical resilience and spiritual energy. Rebuilding the entire city in a very short period of time also demonstrated the business community’s ability to tackle large projects. However, some of the exposition’s events and projects were designed to convey a very different sentiment—the memory of a great loss and an appreciation of the fragility of human life and creation. A pavilion, designated to house an art exhibition, was to become a natural site to display melancholy, while the rest of the fair was to exude the optimism of industrial capitalism expanding around the globe, connecting the Pacific and Atlantic Oceans, bridging East and West.”

I repeatedly returned to the Palace of Fine Arts over a period of several months, always sitting in the same place at roughly the same time of day (late afternoon until sunset). I saw a different lighting and mood every time! Thus this painting depicts a myriad of moods, lighting conditions and skies. You can see that in the time-lapse replay. That’s the beauty of plein air painting over time and something that can’t be painted from referring to a single photograph. The more I observed the more I saw. There is magic in the air at the Palace of Fine Arts.

The Palace of Fine Arts signifies the rebirth of the City literally rising out of the ashes of the 1906 earthquake and fire, and saying “we’re back in business, come and visit!” Located at the edge of the lagoon (also designed by Maybeck as part of the installation), at the historical edge of the City (on reclaimed land). As the name implies the function, besides beauty, was to serve as an exhibition space for artworks from around the world (part of that space then became used by the Exploratorium for many years). As an interesting side note, because the First World War had just broken out in Europe a year before the show, the organizers assumed that many European countries wouldn’t be able to get their artworks to California. They therefore invited many additional Californian artists to exhibit. In the end the European art did arrive and they ended up with a much larger exhibition of art than originally envisaged!