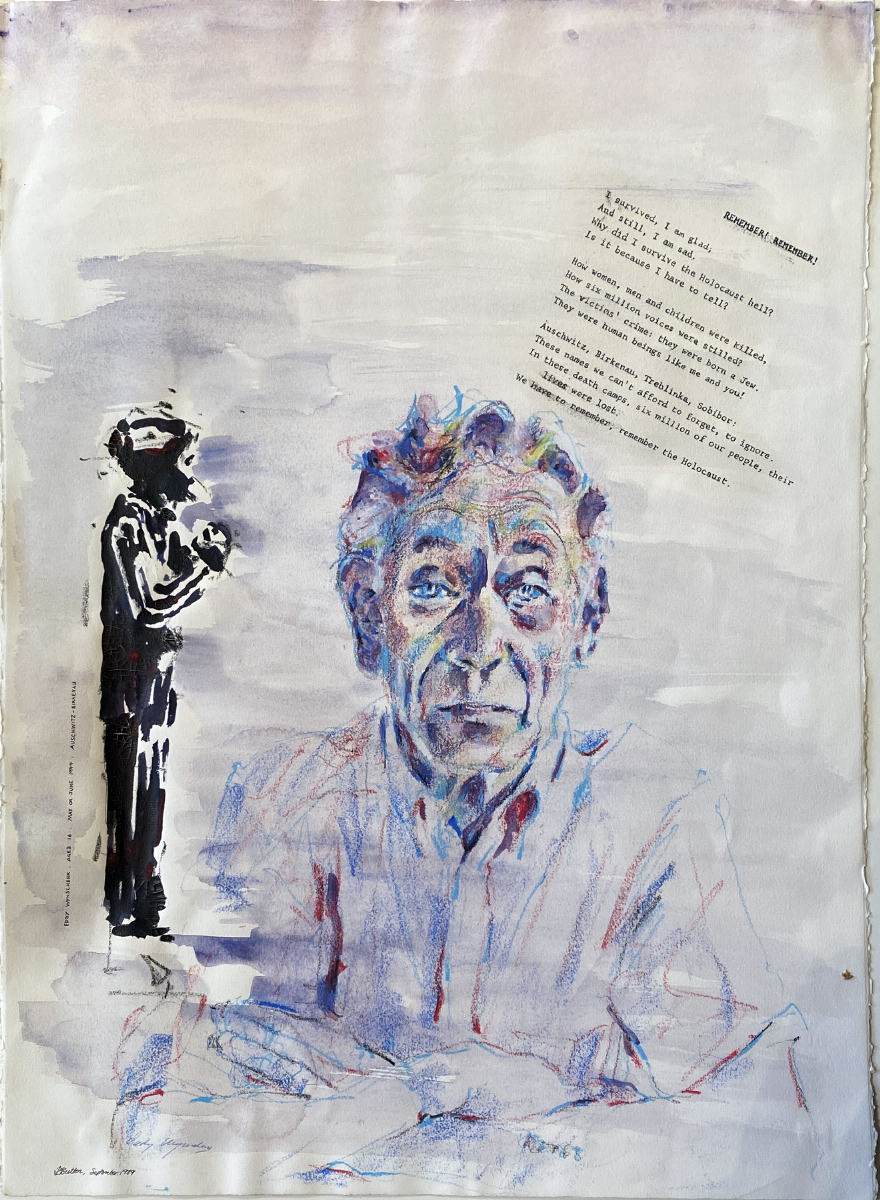 In 1989, after arriving in America the year before, I came across an article that featured Holocaust survivor Eddy Wynschenk. I immediately wanted to draw his portrait and contacted him through the Bay Area Holocaust Oral History Project, the archives of which are now housed in the Jewish Family and Children’s Services (JFCS) Holocaust Center and Tauber Holocaust Library in San Francisco. I subsequently was introduced to other survivors who I drew, and volunteered to conduct some of the Holocaust oral history interviews. With all the years that have passed since I made these five portraits, over thirty years ago, they remain the most important portraits I have drawn, each a visual testimony to survival and to strength and a reminder of how important it is to never take for granted the peace, freedom and life we have.

To draw this portrait of Eddy I came round to his home and he sat for a couple of hours while we talked (sometimes in Dutch—I’d just spent three years living in the Netherlands) and I drew him from life in one session. I did not use reference photos for any of the portraits in this series. During our sitting Eddy shared a poem, ‘Remember! Remember!’, he’d written in 1981 and a photo, taken illicitly by the SS during the arrival of Hungarian Jews in Birkenau in 1944, that he’d accidentally come across in a historical book he was given in 1987. He recognized himself in the photo: the first time he’d seen what he looked like in the camps since there were no mirrors. I used copy toner transfer techniques to add the poem (based on his type-written copy) and the photo to his portrait. When the portrait was completed I asked him to hand sign the portrait as a graphic statement of his survival. 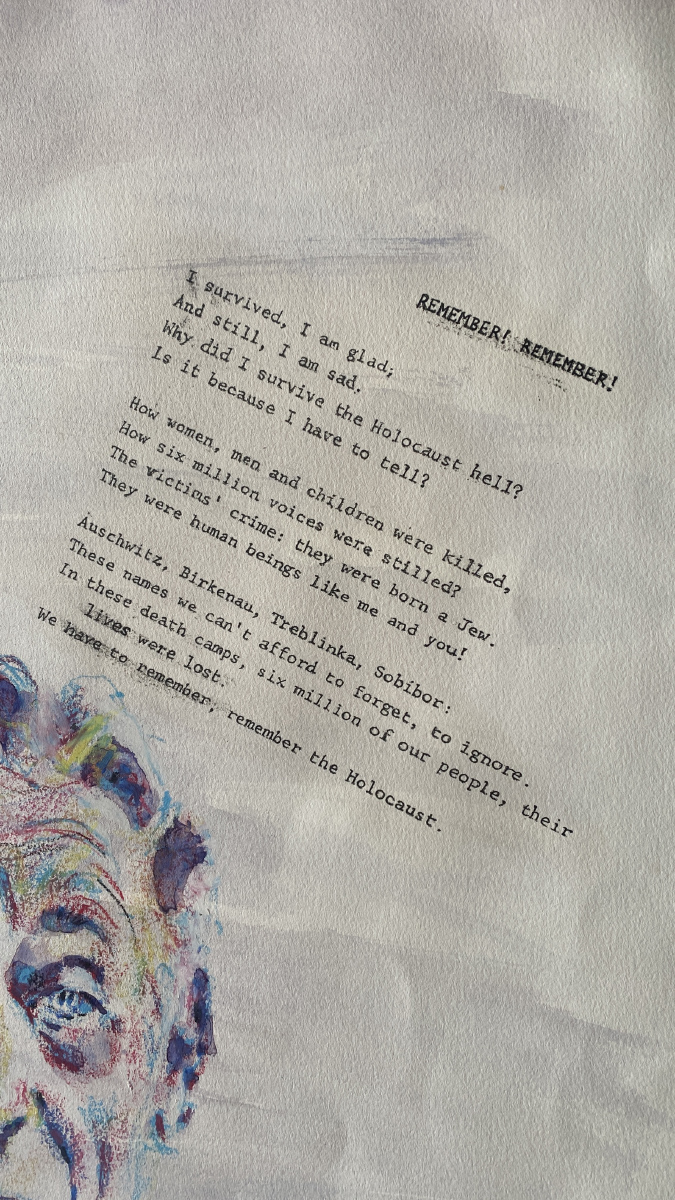 Please scroll down to see the other portraits in the series, all drawn from life in a single sitting and each one hand signed by the survivor: 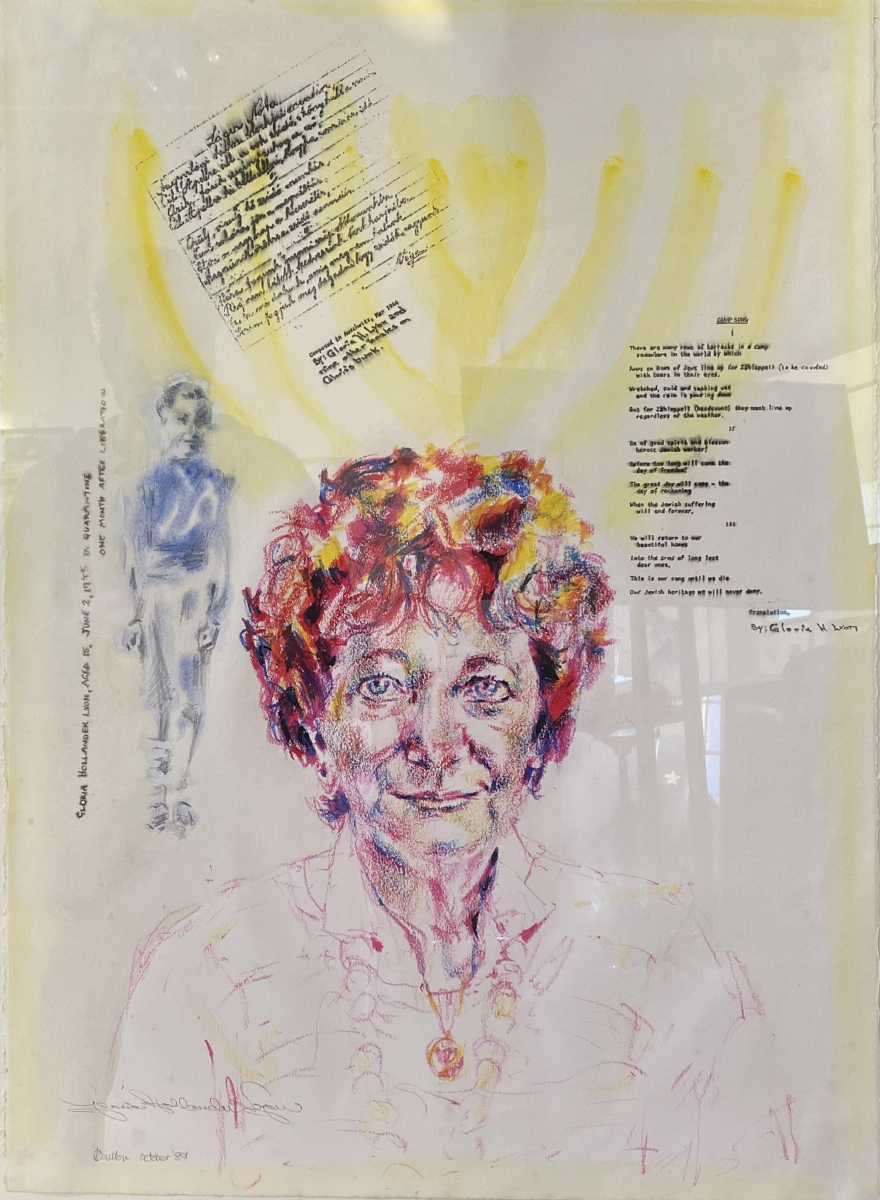 Gloria Hollander Lyon (formerly Hajmal Hollander) was born 1930 in Czechoslovakia. She spent the war time in the following camp locations : Auschwitz-Birkenau, Bergen Belsen, Braunschweig Hanover, Hamburg, Beemdorf and Ravensbruck. The ‘Camp Song’ (translated from Hungarian by Gloria) that you see in the upper right of this portrait was composed by Gloria and nine other women upon arrival at Auschwitz-Birkenau and sung to the tune of ‘Hatikvah’. The figure on the left depicts Gloria three weeks after liberation in Sweden, growing her hair back and with a bandaged leg recovering from malnutrition. When I had completed the portrait Gloria sung the ‘Camp Song’ to me. I cried. It was one of the most moving sounds I have ever heard. You can watch Gloria’s oral history testimony from recordings made as part of the Bay Area Holocaust Oral History Project (click here) and at the United States Holocaust Memorial Museum (click here). 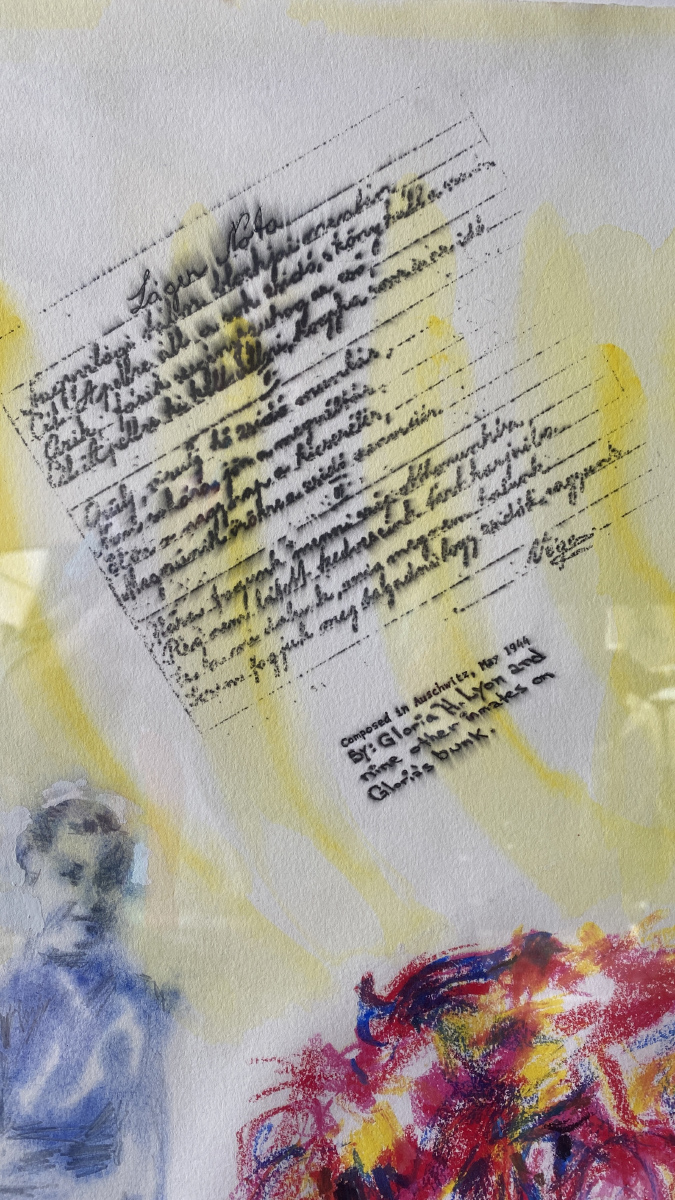 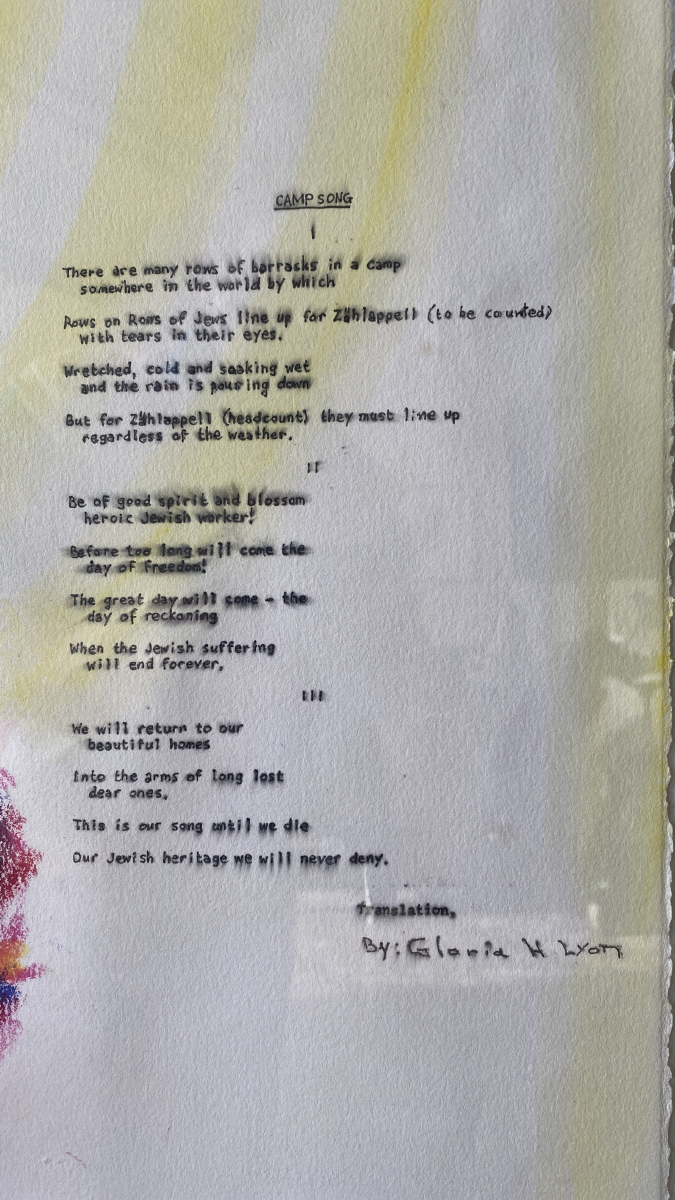 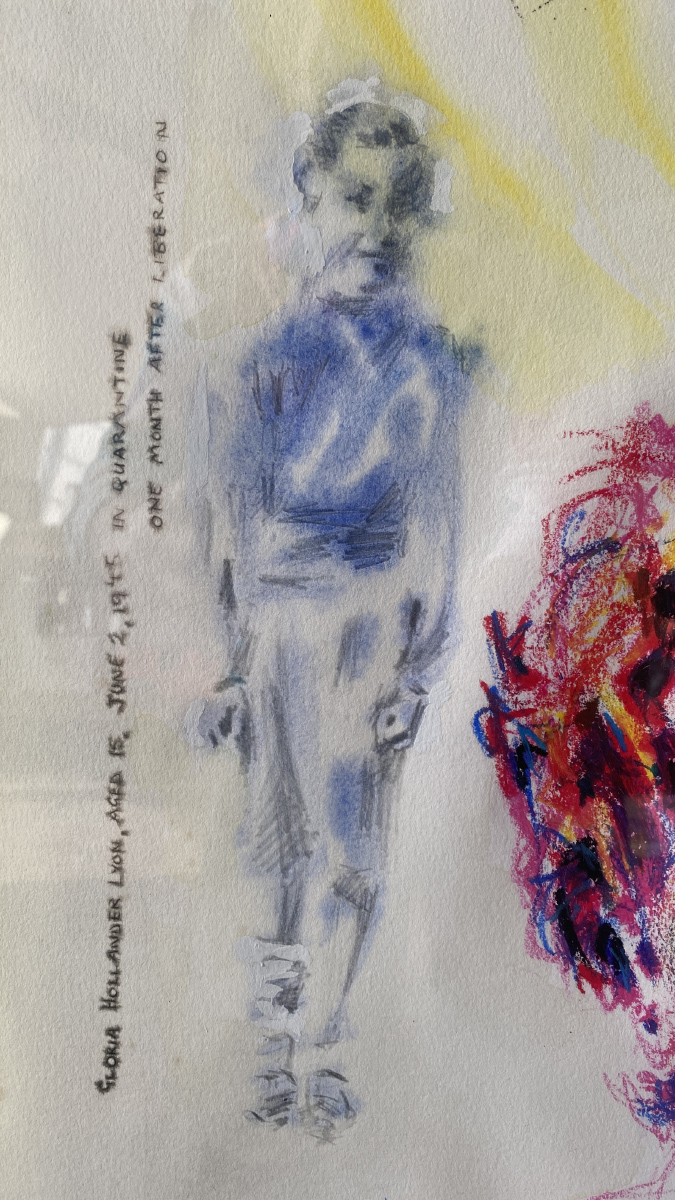 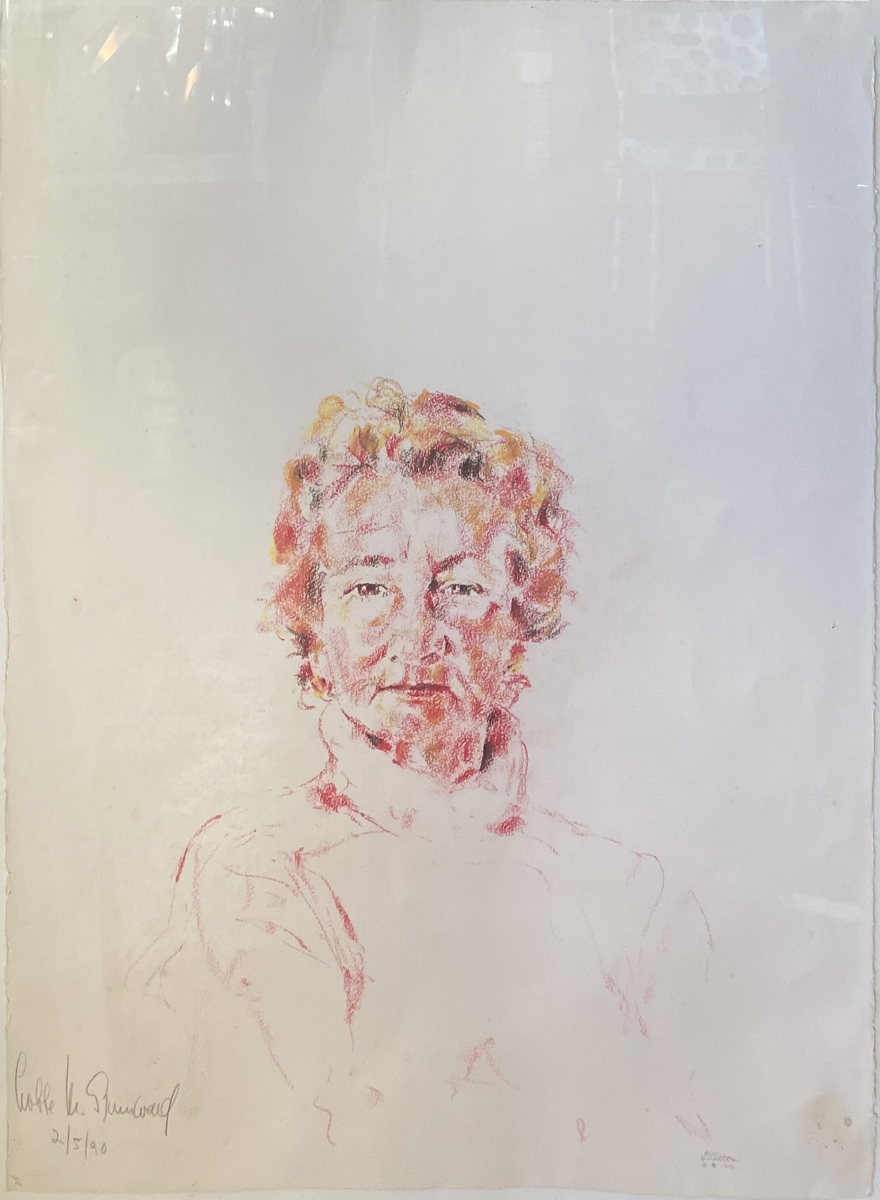 Lotte Grunwald (formerly Brentina Lotte Moses) was born 1915 in Frankfurt, Germany. She was in the following camps : Vucht, The Netherlands (1943); and Auschwitz-Birkenau and small workcamps (1944). Was liberated by the Swedish Red Cross in April, 1945. Click here to watch Lotte’s video testimony in recordings from the United States Holocaust Memorial Museum. 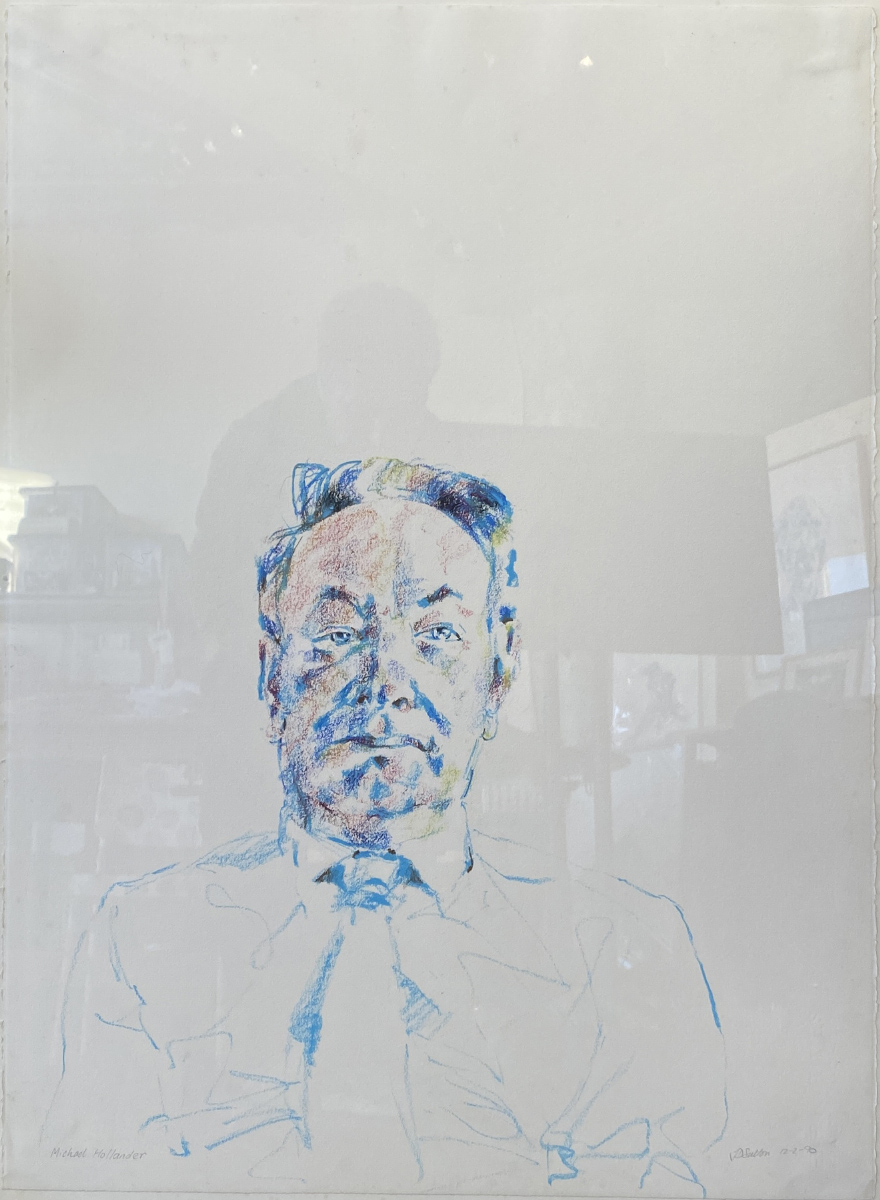 Michael Hollander was born 1923 in Czechoslovakia. He spent the war time in camps in the following locations : Auschwitz-Birkenau, Buchenwald, Dora-Nordhausen and Hartzg. 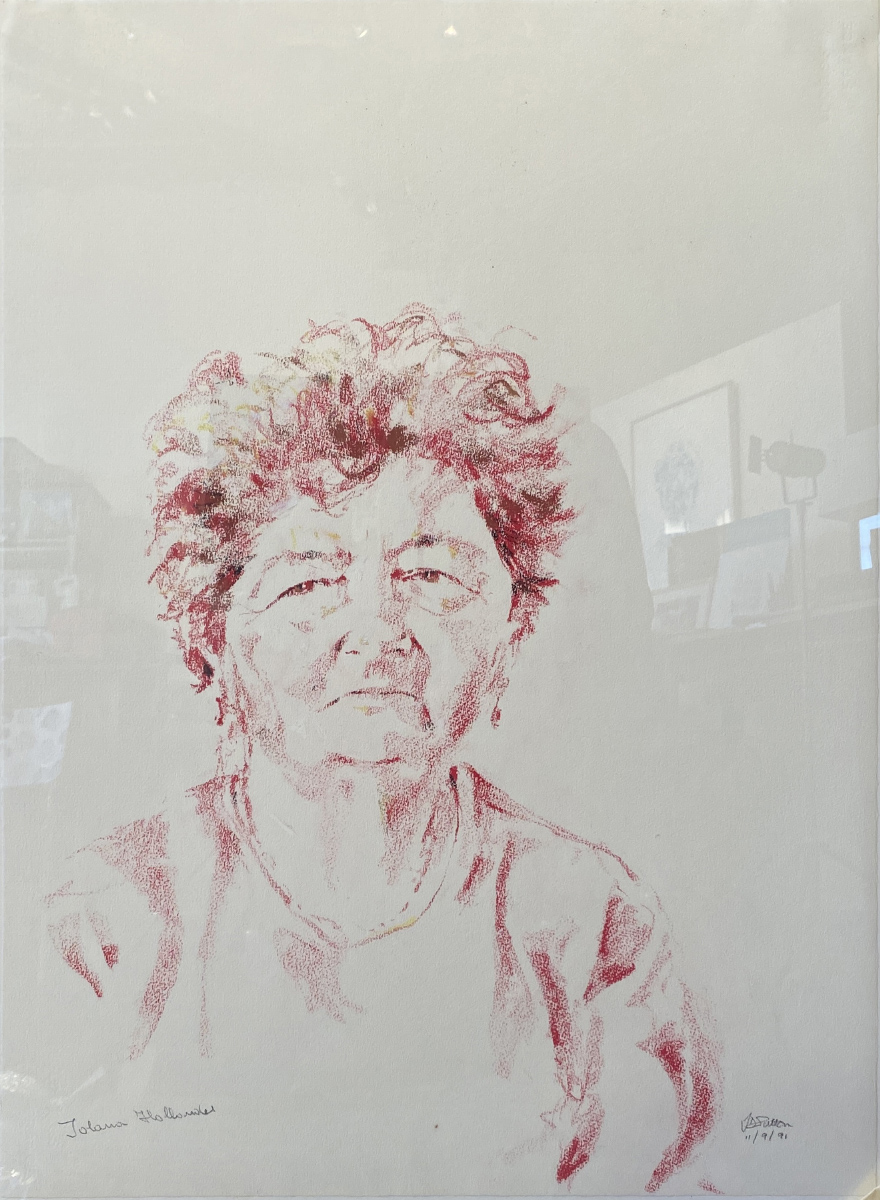 Jolana Hollander was born 1928 in Vari, Czechoslovakia. She spent the war time in the following camp locations : Auschwitz-Birkenau, Breszhinka, Malhov, Tauho and Ravensbruk. Click here to listen to an audio recording of Jolana’s testimony from the United States Holocaust Memorial Museum.

This series was exhibited in 1992 at the Berkeley Richmond Jewish Community Center (BRJCC). This was the statement I wrote at the time to accompany the exhibition:

A Series of Portraits by Jeremy D. Sutton

My passion for drawing people and my awareness of being Jewish have both been important parts of my life. However it was not until my father died in 1988 that a specifically Jewish theme emerged in my artwork. His death drove home the realization that if it were not for my parents being in England during World War II, rather than in Continental Europe, I may not be alive today.

About six months after my father’s death, I drew the first portrait in the series, that of Eddy Wynschenk. I had seen his photograph in the Northern California Jewish Bulletin and immediately wanted to draw him, to portray the intensity and sadness expressed in his eyes. I was subsequently introduced to other Survivors by the Holocaust Oral History Project. This exhibit includes five portraits. All the portraits were drawn from life in single sittings usually lasting about two hours. They are primarily oil pastel, some with gouache and Xerox transfer, and are all on 30” by 22” BFK Rives watercolor paper. In some of the portraits I have included images and poems relating to the particular subjects’ own experiences during the war.

For me the people in these portraits represent a living link with a passage of history where the scale of man’s inhumanity to man surpassed all comprehension, where the millions who did not survive would also have been ordinary people living out their lives.

At the same time as beginning this series, I also began to help as an interviewer for the Holocaust Oral History Project. Both drawing the portraits and conducting interviews have been emotionally difficult : trying to imagine how it could be possible for one person to hate another, to participate in such evil, simply because the other person happens to be Jewish, or of any particular persuasion or ethnicity.

I see these portraits as being part of the record of what occurred, a visual testimony to the survivors.

The five portraits shown on this page are in the chronological sequence in which I drew them, from Eddy first to Jolana last.